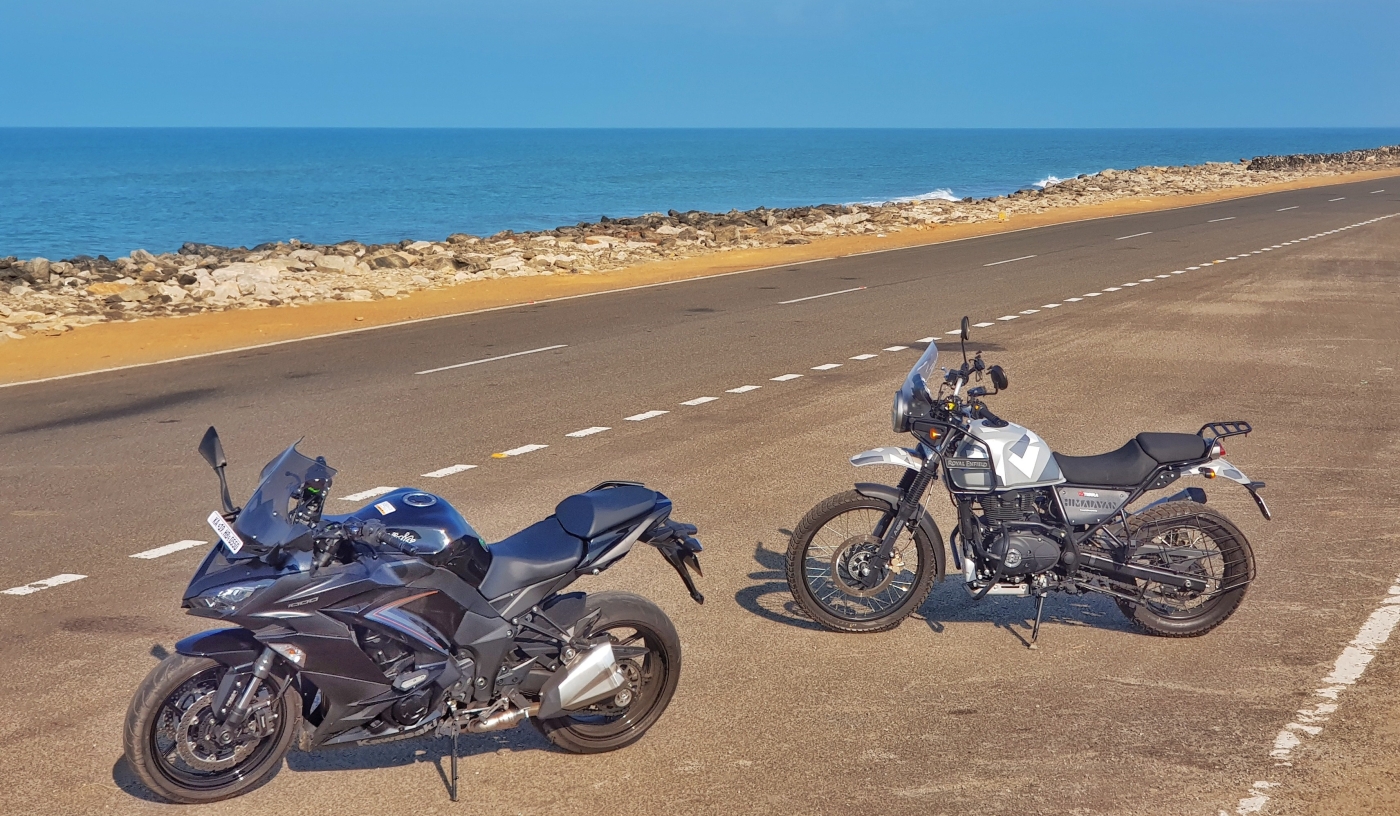 Expand your mind and recharge your spirit!

That’s how we wrapped Dhanushkodi.

Off the ship, vacation and brand new bike(Kawasaki Ninja 1000) in the garage.The itch started, itch to explore some place.Donned the thinking cap and started working on various options. Dhanushkodi was on cards from long time.Having visited Rameshwaram and complete South India as a kid, when my dad used to take us on tours on his banks LFC, had faint visuals of the Pamban bridge registered.Without any second thought ,mind was set  and so the planning started..of-course with the wife’s approval! 🙂

As usual called my cousin Adithya who had accompanied me for the Ladakh drive last year.Having covered the xtreme north village at Line Of Control during our 9000 kms ladakh drive on my Ford Endeavour, this time we geared up to visit the xtreme south tip, last village of India.With this we will complete scaling complete South tip to North tip by road.

Cousin had bought brand new RE Himalayan Sleet which was biting dust in his garage and had just finished its first service.Route plan was fixed as Bangalore to Rameshwaram  via Salem and Madurai.That means from Mangalore I have to ride to Bangalore and then join my cousin and depart the next day.25th I left for Bangalore and 26th we departed Bangalore to Rameswaram.We left Blore at 5am to beat the famous Silk Board traffic.We knew it would be hot burning ride and wore all summer riding safety gears.

Within no time we were out from Bangalore and we were in TN and stopped for breakfast at Salem A2B. Plan of action was to reach Rameshwaram to witness train cross the Pamban bridge.Checked out train time tables and found few trains arrive and depart at around 4pm.So our aim was to reach Rameshwaram at 4pm.We rode non stop after having bf at Salem and kept riding without stopping for lunch.One our way, we kept hydrating having water and tender coconut as the weather had become hot.

Managed to reach Pamban railway bridge @ 4 pm sharp and luckily found one train crawling over the bridge towards Rameshwaram.Must say, the roads till Rameshwaram from Bangalore was just brilliant.There were maintenance activities on the bridge.This bridge is over 100 years old and had survived the deadly 1964 cyclone which washed way the whole town of Dhanushkodi.Speciality of the bridge is, it opens midway to facilitate small ships crossings.Suppose to be India’s first sea bridge.This rail bridge was the only bridge which connected Rameshwaram to main land until a parallel road was constructed later.Stopping over the bridge is prohibited but u can see vehicles being parked at sides and clicking pics of the magnificent view.

Seeing our bikes, two local youths gathered, two became few and were taking photos with the bike.We decided to wrap and depart as it was causing inconvenience on the bridge.Reached our hotel Daiwik by around 6pm and rested for the day after riding non stop for 12 hours.Service of the hotel was excellent ,they offered us special secured covered parking too for our bikes exclusively.

Checked google and found tides at Dhanushkodi were normal ,these were checked prior planning this trip. There were cases roads were closed coz of high tides.Checked the sunrise time and found it to be 6:13am.From hotel,Dhanushkodi was around 20 kms.So we decided to leave early morning 5:50am. 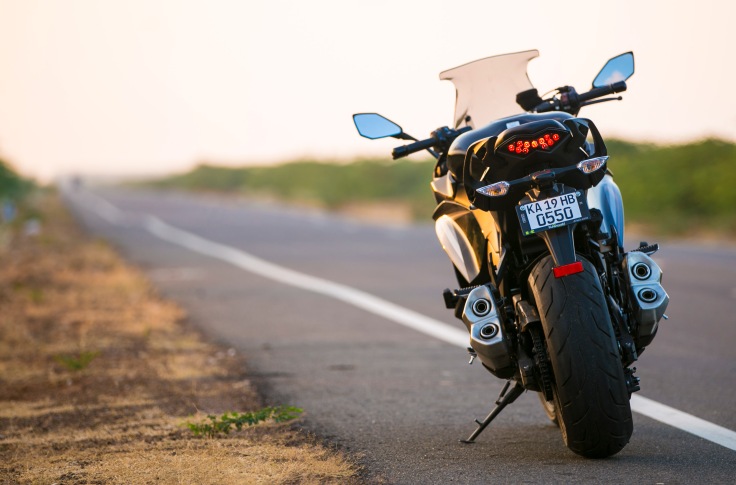 Sharp 6 we were up running and in no time we reached the Dhanushkodi stretch.The last 5kms is the stretch we were caving for.We were lucky not to find any tourists on the stretch except for few locals. We reached old abandoned town of Dhanushkodi which was washed away during that 1964 cyclone.You find thatched huts selling all sorts of shells and jewellery.You find restaurants serving fresh caught fish.There are lot of temples on the way.You can find ruined structures like churches, railway stations, post office.They say few more structures are still below water.The 1964 cyclone had killed approx. 1500 ppl as there was no census taken that time and bodies kept floating they claim.Then govt had declared it has ghost town and not fit for living.In 2004 , they say water along the shore flowed  some 1500ft backwards before hitting the coast as Tsunami. 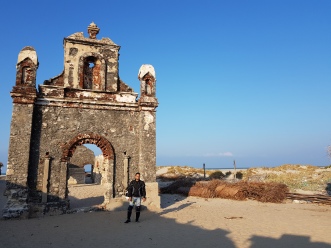 The whole Dhanushkodi beach stretch is of 5kms and its one hell of an experience to ride on this stretch. Two years back there was no roads till the last point and one has to take local 4×4 vehicles to reach the last point.Now you have a well paved tarmac.There is heavy crosswinds though, only stretch you never feel to race as you get absorbed by the beauty and fresh air. 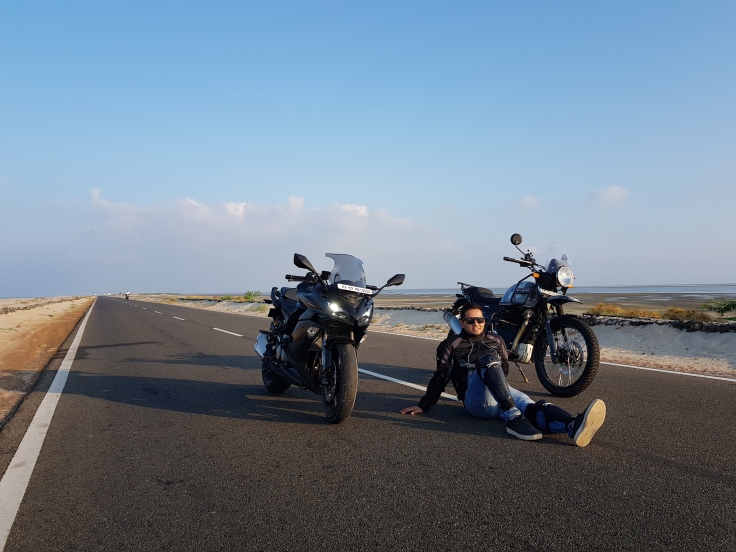 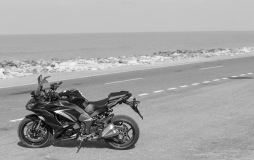 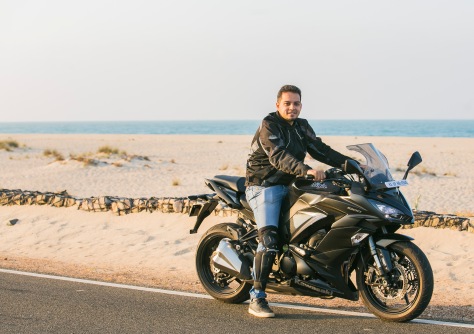 The last point is  a confluence of Bay of Bengal and Arabian Sea.The stretch splits the water into two.One side you can see there is no waves and other side waves.At nights, locals say they can see lights from Lankan side.Though tourists are not permitted to enter Dhanushkodi after 6pm and also no-one permitted to enter before 6am.There is a check post, but when we reached at 6 ,we couldn’t find anybody there and was open.There is a flying squad patrolling the area.The last village is called Arichalmunai and as we reached this point we saw our cells network changed to SriLankan(Airtel)

End Point:From here locals claim they can see lights from Srilankan side 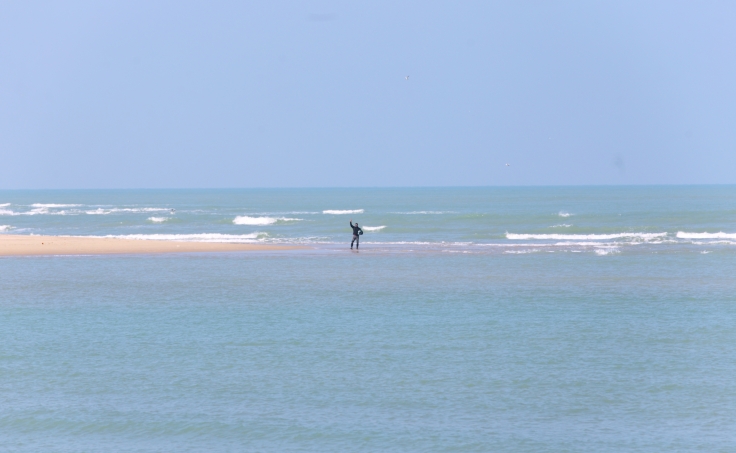 Thats the max one can go by foot,Confluence of Arabian sea and Bay of Bengal

As the sun came up ,we found Rameshwaram temple pilgrims visiting the Dhanushkodi and started to get crowded.You find pilgrims taking holy dip and  immersing ashes.We clicked pics and videos and at around 1030am we left Dhanushkodi having local watermelon/raw mango and pineapple sprinkled with chilli powder/ salt.

Dhanushkodi is of religious importance for Hindus as described in Ramayana.The natural bridge with floating rocks connects Lanka on the other side.They claim Ram had formed this bridge.There are lot of studies and controversies relating to this, being a sensitive topic its good not to disturb.They say the carbon date on these rocks syncs with Ramayana time.They say Ram to clear his sins after Lanka episode ,took a dip and offered gratitude to Shiva ie now Arulmigu Ramanathswamy temple(one of the 12 Jyothirlanga temples).One of the char dhams. There is a bathing ritual followed here, you can find tourists visiting and taking holy dip at beach(Agni Theertham) and then holy dips at temple wells before heading to main Darshan.You can hire guides though. Guess its 36 dips in ocean, dip from 22 sacred wells and to main Darshan.Temple is massive and  hosts one of the longest corridor consisting of massive pillars.

After Dhanushkodi we left for our hotel, had lunch and took rest and left for temple Darshan at around 5pm. Online reviews said there is dress code and no jeans or tees allowed. We asked our hotel reception and found only shorts not allowed.So we were all set and headed for the temple which was 3km away. Narrow lanes and haphazard traffic caused headache.Decided to take the Himalayan and leave the Ninja behind.Parked the bike,Deposited our cellphones and entered the ancient massive temple. 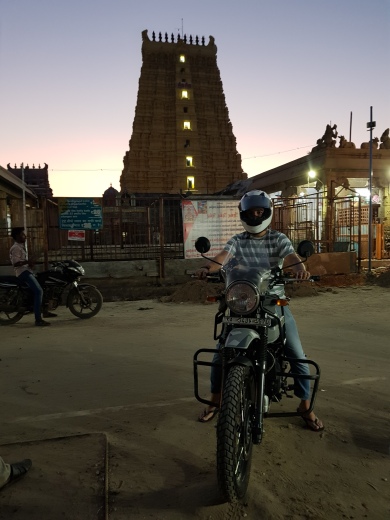 By 7pm, done with temple we left back to hotel and started preparing for our next day early morning 5am departure, which would be 12 hours ride and we will enter Bangalore at peak 5-6pm and would be a nightmare manoeuvring the hot beast.Morning 6am we departed hotel, and crossed Pamban bridge again.Took final photographs and said goodbye to Rameshwaram.

Dhanushkodi stretch-Carry water and food.Time of entry 6am to 6pm.Wear full mask helmet coz of heavy winds and sand.Check out on tides.Best time is sunrise or sunset.Watch out for crowd on weekends.Temple is a must visit and the Dhanushkodi stretch is where u get recharged!